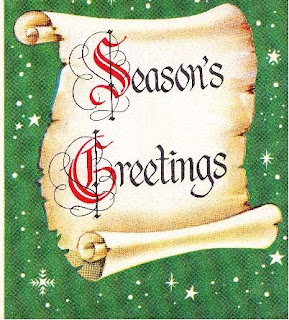 Today I thought I'd share a family heirloom recipe.  However, it's a recipe I can't exactly recommend that you try -- unless you are the sort who loves a challenge and doesn't mind wasting some expensive ingredients.

My mother was locally famous for this creamy maple fudge. All during my growing-up years, she made batch after batch of it at Christmas time. When she first perfected the recipe, she often made pounds of this fudge for the Methodist church's Christmas fair, where it was in great demand.   In later years the fudge production was for the benefit of family and friends, some of whom expected to receive maple fudge every year and would have been cruelly disappointed not to receive it.  It has a true maple flavor and a creamy texture and should be cut in tiny pieces around an inch square because it is very rich.

My mother had been given the recipe by a neighbor lady. 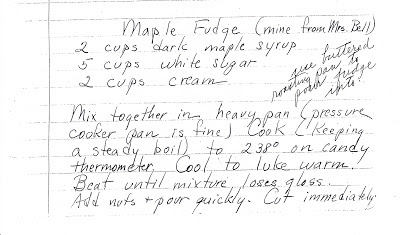 Over the years, many people asked my mother for the recipe, and she happily shared it. However, it was a very tricky recipe and no matter how good a cook she gave the recipe to, the fudge would seldom come out right. Boiling, candy thermometers, cooling to the exact right point and then what seemed to be hours of beating were all involved in the proper preparation of this delicacy. Yes, it was delicious, and it certainly was a triumph to be able to produce something so difficult that no other living woman (other than the neighbor lady who gave her the recipe) had been able to do. But it always looked like a lot of trouble to me! My siblings and I used to enjoy scraping the fudge kettle, but none of us had much interest in learning to make the candy ourselves.

My mother has passed on now, and the secret of the maple fudge has gone with her. Even though I have the recipe, I can't imagine going to that much trouble. I will share it here, just for old time's sake. But I make no guarantees!

If you try this fudge and it comes out well, pat yourself on the back. You've achieved something very few cooks have been able to do. If you try it and it doesn't work, don't blame me -- I did warn you! (Incidentally, failed fudge may work well as a sauce over ice cream.)