The day after Christmas 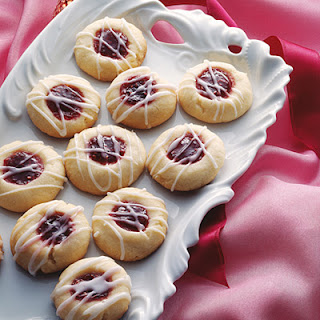 These Almond Shortbread Thumbprint Cookies were on my baking list, but I hadn't gotten them baked.  I was actually just going to skip it when I remembered a cookie tray I planned to make for a friend who'll have a houseful of 20-somethings starting tomorrow.  The house was chilly and I thought baking was not a bad way to warm it up.

One thing I was reminded of about these cookies, though -- my usual trick of replacing all-purpose flour with the Bob’s Red Mill 1-to-1 Gluten Free Baking Flour just doesn't work well with this recipe.  They spread out too much -- a fact that I would have known if I had followed my grandmother's good advice of baking a test cookie.  Be that as it may, these cookies will still go on the cookie tray even though imperfect.

I also made a crockpot full of chicken soup for friends who had planned to drop by today, but they ended up rescheduling to tomorrow.  The soup will go in the fridge until then.

So, I also promised to give a bit of an update on our Christmas Eve and Christmas Day doings.  Let's see.

Christmas Eve -- Mr. T worked that day.  I took a cookie tray to our neighbors across the street, and another to my walking partner and her hubby.  She was unable to get away for a walk that day but we took time for a cup of tea and a half-hour visit.

On Christmas Eve, we usually have two of our local granddaughters over for supper (our traditional Christmas Eve Soup) and have our Christmas with them at that time.  This year, all that changed because of some travel plans and so we have rescheduled to early January.  That meant our own Christmas Eve looked different, and that's okay.  We had leftovers for supper, actually!

After supper, we took time to open some of the lovely cards I received in a swap with my friends at the Christmas Friends craft forum.  It was my hubby's idea to brew some Candy Cane Lane to sip while I opened the cards and we both admired them.  The creativity of some people is downright amazing!  I had also received a link to a Cracker Barrel YouTube video featuring their gorgeous fireplace.  We admired the cards and sipped our tea in front of a snapping, crackling fire as seen on my tablet.  Just plain fun!

Christmas Day -- we began with this delicious Hearty Breakfast Egg Bake along with sourdough rye bread (from our neighbor Walter) and some clementines. 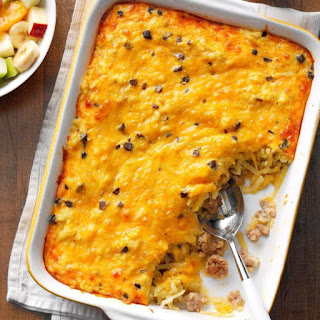 Then Mr. T headed out to drop off some cookies and a card for his mother, and a large gift basket for his boss and family.  I accomplished a lot of gift wrapping while he was gone.  Upon his return, we delivered another neighborhood cookie tray and I finished the wrapping.

Around 3 pm we headed over to our daughter's (about 15 minutes away) for a delicious Christmas dinner of roast beef, ham, mashed potatoes, sauteed green beans, tossed salad with apples, craisins and homemade cranberry vinaigrette, and some amazing Parker House rolls.

After dinner the men and kids played games or tried out Christmas gifts while Carrie and I cleaned up the kitchen.  Then we opened gifts and just had such an enjoyable time together.  After awhile we brought out dessert, which was (you guessed it) a cookie tray, plus Eggnog Logs and Chocolate Spritz made by 14-year-old Sam, and Buckeyes made by 10-year-old Josiah.  Julia (12) helped Sam with the Eggnog Logs by imprinting the frosting with fork lines for "bark".  We enjoyed eggnog along with the cookies. 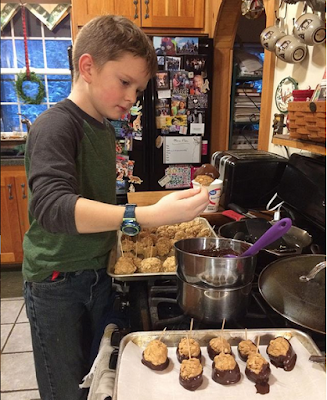 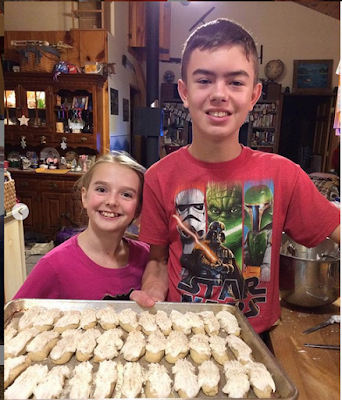 Then Mr. T and I returned home and watched the "Christmas Story" episode from Season 1 of the Andy Griffith Show.  We didn't have time for a movie, but this TV show episode gave the same flavor in less time.

And that was our very nice Christmas!  I'm still savoring the season, though, even though the big day is over.