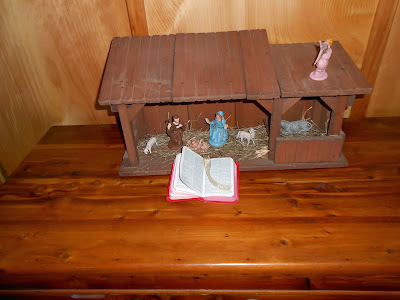 The most important thing I did toward Christmas today was to set up the Nativity scene.  It actually looks a bit different from the one above, which is from a previous year.  I still have the same stable and New Testament (open to Luke 2), but the figures are different.  I have never liked these, but they were all that was to be found the year my dad made the stable for us.  So all these years I have had them.  Now I've inherited the figures my parents had, which are much nicer looking.  Maybe in the next few days I can get a picture.

Then I finished a very large sewing project I was working on (simple enough, but large) and started another sewing project.  Good progress was made on that.

I also wrapped many more gifts and, with Mr. T's help, packed another box for Nevada.  Lots of his cookies and fudge are winging their way there in yesterday's box, and the recipients are already eagerly anticipating its arrival!

Finally, in Christmasy news, we got about fifteen (15) inches of snow today.  It seems strange to have gone from no snow on the ground at all, to having lots and lots of the fluffy white stuff!