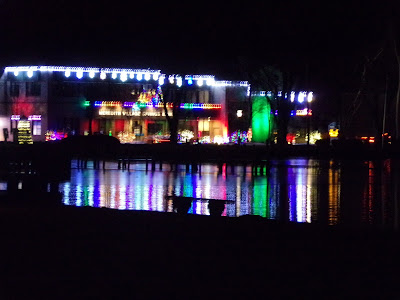 On a recent late afternoon, Mr. T and I took another drive to look at Christmas lights.  Interestingly, this is one of those activities we've wanted to do  in the past at Christmastime, but very seldom got around to actually doing it.  I can remember just a couple of times when we did so, and then it was just around some of the back streets downtown.

This year we have gone out three times to look at lights.  This last foray was the farthest afield.  We drove about a half hour to a lakeside town, then along to another town on the same lake.  From there we took more back roads to get home.  It was a lovely light tour.

At the second lakeside town, we parked and got out and walked around to take pictures.  It was about 30º -- very moderate for this time of year -- but felt a bit chillier due to a breeze off the lake.  We saw a few other folks wandering around doing the same thing we were.  I'll just share a few more photos and hope you enjoy.  The video below is of a rushing waterfall next to an old mill building transformed into shops, restaurants, and a hotel.

There you have it -- our third and probably last light tour of the 2020 holiday season (and the only one of which we got photos!).