Poem from a vintage magazine 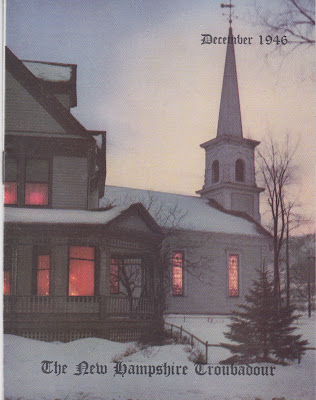 I inherited quite a collection of New Hampshire Troubadour magazines from the late 1940s and early 1950s.  Since then I have found a few more, including the December 1946 issue pictured above.  Isn't that a glorious cover photo?  It shows the Methodist church in Gorham, New Hampshire.  But what I like best about it is the lighted windows in the church, and especially in the house.

The back cover is very nice, too.  That one is simply labeled as "An Old New Hampshire Home" -- it doesn't say where it is, but the photographer was E. Greely Clark. 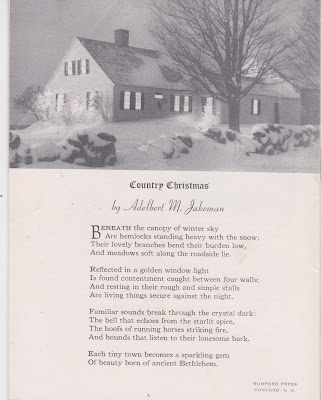 Now, to me, that house looks very familiar.  I was sure I had seen it in another photo.  At first I thought it might have been the one below,  from a different perspective, of course.  But now I don't think so -- there's no stone wall in the photo below, and no shutters on the windows of the house.  Still, I love that photo below (which was a back cover on the December 1950 New Hampshire Troubadour), so I'm leaving it in the post. 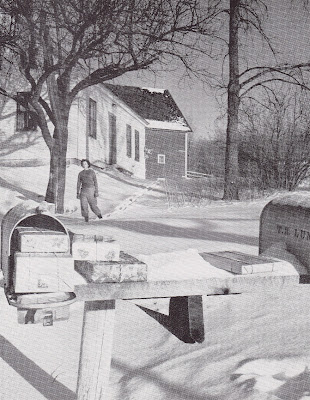 Back to my most recent find!  The December 1946 issue features a lovely Christmas poem which I would like to share with you all.

Beneath the canopy of winter sky
Are hemlocks standing heavy with the snow;
Their lovely branches bend their burden low.
And meadows soft along the roadside lie.

Reflected in a golden window light
Is found contentment caught between four walls;
And resting in their rough and simple stalls
Are living things secure against the night.

Familiar sounds break through the crystal dark:
The bell that echoes from the starlit spire,
The hoofs of running horses striking fire,
And hounds that listen to their lonesome bark.

Each tiny town becomes a sparkling gem
Of beauty born of ancient Bethlehem.

I thought this poem painted a beautiful picture.  "Contentment caught between four walls" would mean so much in light of the recently ended World War II.  And "living things secure against the night" would speak of a blessing too, remembering that dark time when security felt very tenuous indeed.

I am not sure of the meaning of the last line, but I do know that whenever I see little towns depicted on Christmas cards -- even towns of a far different century and continent than Bethlehem -- it does always make me think of that little town where Christ was born.

This vintage poem seems like a lovely note on which to end this year's Christmas in July.  See you again soon here in the Christmas Kitchen!
Posted by Mrs.T at 5:00 AM