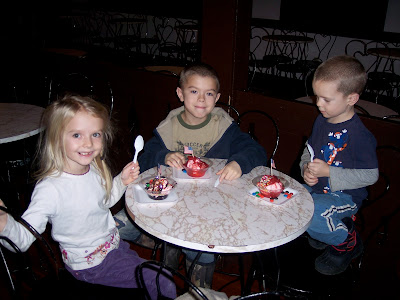 Just a week before Christmas, Mr. T and I took 3 of our grandchildren on a little mystery trip.  We wouldn't tell them just where we were going, only that we were going out for ice cream to start with.  In retrospect, it would have been best to do this on a Saturday or Sunday afternoon -- which, actually, was what we had planned to do, but our plans were derailed by one thing and another and we were now down to only evenings after work to choose from.  The place we wanted to take them for ice cream sundaes closed at six p.m. so we had to do something very unorthodox and eat dessert first.

We got there a few minutes after five and had the ice cream shop area to ourselves.  It took awhile to decide on a base flavor at the ice cream buffet (actually, it didn't take any time at all for me.  In my opinion vanilla is the only suitable foundation for the varied toppings) but eventually all three kids decided on strawberry.  Then they went through the buffet line and chose toppings -- things like hot fudge, hot butterscotch, strawberries, marshmallow sauce, peanuts, pineapple, and the like. 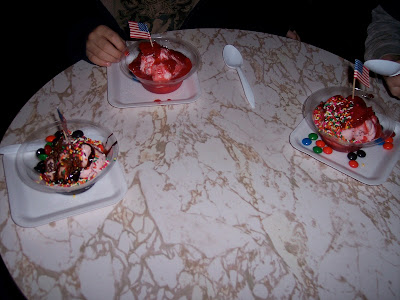 A flag always goes on top! 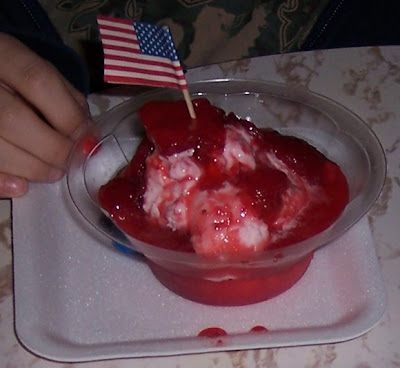 Then we all sat at cute little ice cream tables in the classic ice-cream-shop chairs.  They were so busy looking around at the interesting surroundings, the player piano (which we simply had to put a quarter in) that it was hard for the littlest one to concentrate on finishing his ice cream.  But he managed it! 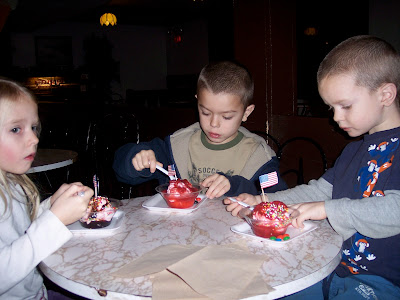 Then we took a quick look at the candy shop and candy making area downstairs.  We discovered they also have a candy buffet, and the kids were interested in doing that another time if we make this little outing a tradition -- which we hope to.  There wasn't time left to look at much else, though they have a lovely Christmas room and a toy room and many, many other intriguing areas.  If we do this again, it will have to be on a Saturday to allow more time.

Then it was off to McDonalds for supper.  The kids loved this, and the one we went to even had a fireplace and a (pretend) talking moose head on the wall.  Sam and I ate our supper by the fire while the others sat at a high table next to us.  So much fun.  Wish I had remembered to take the camera in.

After supper, we headed off to one of our favorite shopping places.  This place is a fun one to visit anytime, but it is especially magical at night in the winter. 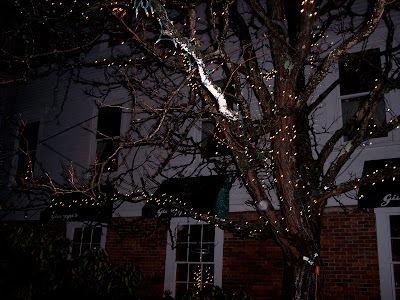 The kids had to see the waterfall from several vantage points and they loved spending time in the book and toy store. 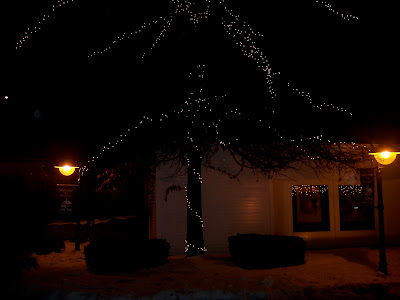 There, I did a bit of shopping while the kids played with the train table and other fun toys.

Then, we headed to a dollar store so the kids could buy some Christmas gifts (funded by us) for their parents.  This is something they had never really done before, so it took a bit of time, but soon enough the choices were made.

The kids' parents were out for the evening too, so our plan was that when we got back to their house we would wrap the gifts and put them under the tree.  But all of our activities took so long that the parents returned before we did!  That was okay -- we had already made a "plan B".  I took the gifts home and wrapped them, then gave them to the kids in a big (stapled shut) bag later that week.  The older two smuggled them into the house and  under the tree, and all three managed to keep quiet about it, so it was a fun little surprise for their mom and dad.

All in all, it was a lovely but busy evening that we hope to repeat next year -- only in the afternoon if at all possible!
Posted by Mrs.T at 10:29 AM

Planning for Christmas in September

Yes, I'm planning a mini Christmas in September while our daughter and her hubby and four little ones are visiting us out here.  It h... 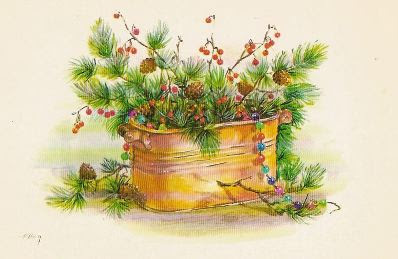