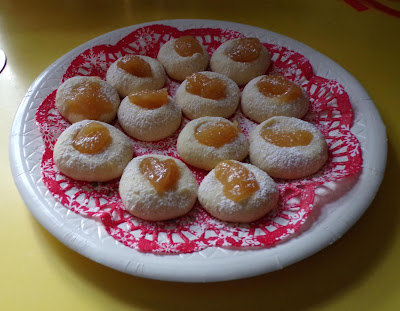 Saturdays in December always seem to be busy, wouldn't you agree?  Today was no exception.

As usual on Saturday mornings, Mr. T spent the hours from 8 to 10 a.m. at the local flag wave near our town's McDonalds.  It was below zero but a total of about 20 hardy patriots were out there standing in the snow and waving lots of American flags.

While he was gone, I wrapped some gifts, wrote some Christmas cards, and prepared a plate full of lemon shortbread thumbprints to take to our friend Terry.

Upon Mr. T's return, we headed 45 minutes south, picked up Terry, and headed out for a late breakfast at a favorite restaurant.  Despite the need for masks and contact info, the restaurant was busy and had the almost-normal holiday weekend bustle about it.  What a sumptuous breakfast we enjoyed!

We visited with Terry for awhile back at her house, then in late afternoon headed home, stopping at Lowe's on the way to hopefully find a container for a gift basket.  We found a nice pine crate that will serve the purpose nicely.

I had finished a small crochet project en route to Terry's, and started another one this evening.  During the time left before supper (we didn't need much!), I wrote a bunch more Christmas cards and Mr. T made a double batch of Cinnamon Pretzels for a couple of gifts.

So it was a productive Saturday as well as a very enjoyable one.  I'll leave you with a photo of our Christmas tree: 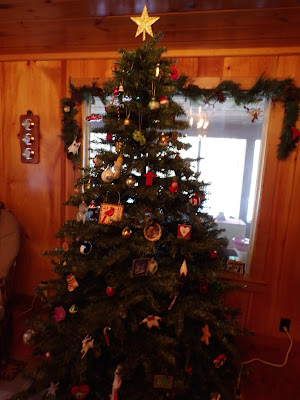 I had turned off the tree lights, so they really aren't visible in the photo.  It is very pretty, though, we think.