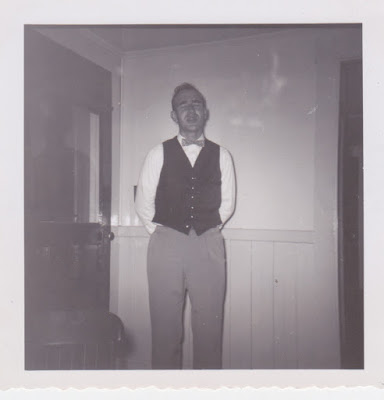 It's long been on my list to write a post about my dad's Christmas vest, so I'm trying to put one together.  It had to have been the early 1950s (they were married in 1949) when my mother sewed him a special vest to wear at Christmas.  I'm guessing it might have even been the first Christmas they were married that she stitched this up.  The fabric was a red corduroy with a black window pane check.  I'm thinking that maybe the photo above was taken on the first Christmas that he owned the vest.

I am pretty sure some of that fabric still exists -- some small scraps.  I've done a brief search but haven't found it.

He wore that vest at Christmas time ever since I can remember.  We usually went to my grandmother's for Christmas dinner and gifts.  During most of my growing-up years, my mother's siblings and their spouses and kids would be there as well.  It was a festive time and my dad and uncles were all exceptionally jolly.  In the Christmas memory book I put together for my kids, I wrote:

One special memory of Christmas for me is the red corduroy vest that my Dad would always wear when we went to Gram's for Christmas dinner and the tree. He and my uncles would all be particularly jovial on that special day, joking with all of the kids and with one another. I had forgotten this, but it seems there was always a lot of joking about how much food my dad was able to eat. One year someone took a picture of him with the turkey directly in front of him, as if the whole thing was for him to eat!

My kids remember him wearing the vest at Christmas during their growing up years.  At that point my parents were the grandparents, and Christmas was at their house rather than at the farm.    It was always a joke how my dad would sit and read while gifts were being opened.  Sometimes it was the newspaper, sometimes a book or magazine.  In the photo below, it looks as if he may be reading a book he has just received as a gift. 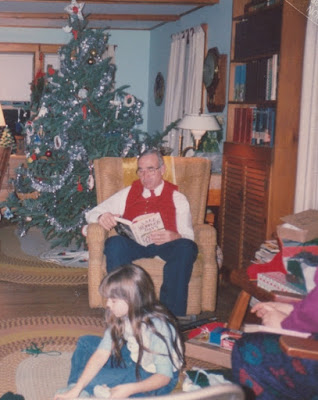 In an earlier photo, I had made my parents a tea cozy for Christmas and he had opened it.  As a joke, he promptly placed it on his head.  It gave him sort of a Roman soldier look. 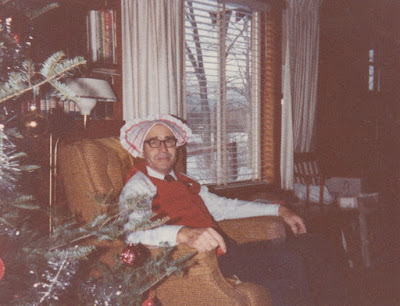 And thanks to the innovation of Skype, some of his great-grandchildren have also seen him wearing the Christmas vest.

You see, one of the last Christmases he celebrated with us at our home, my hubby went to pick him up for dinner and a few hours together, during which we planned to Skype with the Nevada grands.  My dad had many memory issues at that point in his life,  and his short-term memory was particularly bad.  He had forgotten many things, including our phone number, and he often forgot to eat.  But it was Christmas ... 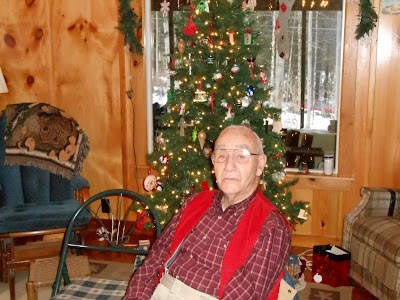 ... and he had remembered to wear his Christmas vest.
Posted by Mrs.T at 5:00 AM

Here is a UFO [unfinished object] of long standing, which I managed to complete last evening! I have long enjoyed the art of D. Morgan, an...